Installing a level drop ceiling in a basement can be done by just about anyone. However, many basements (especially older ones) have lower head clearances than basements built today. Duct work, support beams or piping 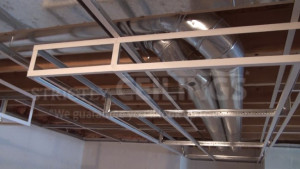 may hang down from the floor joists above which can limit head clearance. They can also cause installation difficulties when installing a suspended ceiling.

However, if installing a flat and level ceiling is not an option, there is a way to retain the maximum ceiling height in most of the basement and then cover any obstructions below the ceiling by building a vertical suspended ceiling drop.

Strictly Ceilings has installed thousands of vertical ceiling drops in basements. You can learn how to build these drops by taking advantage of our 20 years of experience. Here are some step by step instructions on how to install a basic vertical drop out of drop ceiling materials.

Step 1   Determining where to start the vertical ceiling drop

It’s best to assess the heights of the basement ceiling before you begin the installation. Go around the room and 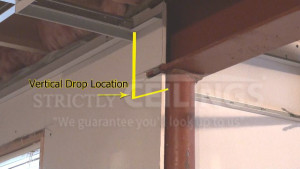 It’s also best to layout the ceiling keeping in mind the location of the vertical drops.

Determine where a potential vertical drop might have to be installed and center the ceiling grid based on the location of the vertical drops.

Make sure that you install all of the drop ceiling grid to its highest elevation in the main portions of the room first before any vertical drops are built.

Step 2  Determining the height of the vertical ceiling drop

Once the main grid is installed on the upper portions of the ceiling then determine the height of the drop. You have already determined what the lowest obstruction is. Let’s say that it is duct work and the height from the floor to the duct is 7’1”. 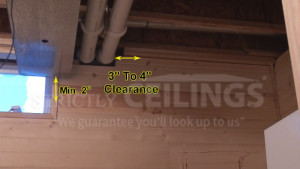 Standard drop ceiling grid has a height of 1 ½” so if you want to install ceiling grid underneath the duct you’ll want to be a minimum of 2” below the lowest obstruction whether it’s a duct, beam or pipe. 2” would allow minimum clearance for tile installation however the more clearance you allow the easier it is to install the ceiling tile.

Measure from the ceiling height to the bottom of the obstruction and add the 2” of clearance. This will be the total height of the drop.

Measure and cut your wall angle and bend it on a 90 degree angle. Install it so that it is at the height you determined. If the vertical drop runs the entire length of the room, do this for both ends of the room.

Once you have determined the height of the vertical drop, determine the point at where the drop will begin its downward direction.

Let’s say that you are building a drop around duct work again. We allowed a minimum of 2” on the bottom of the duct for height. On the side though we want to leave a minimum of 3”. This will allow you to build the vertical drop and install clips on the back of the ceiling tiles later to hold them in place. http://www.strictlyceilings.com/P/127/StrictlyCeilingsPiranhaHoldDownClips10pk 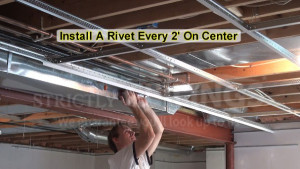 Keeping the minimum 3” clearance from the obstruction, install a piece of wall molding upside down on the upper portion of ceiling grid that you already installed.

Pop rivet the wall molding to the cross tees and main runners at every location on the upper portion of the ceiling grid. Measure from the nearest cross tee at each location to keep it straight.

If the wall angle ends in the opening of the ceiling grid and not on a cross tee, cut it at the center of the cross tee and butt the next piece up to it. This way you can pop rivet both pieces to one tee.

Step 4 Installing the vertical tees into the top angle piece

Next, you’ll need to install all of the vertical tees into the upper angle piece so that you can install the bottom angle. 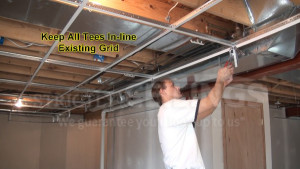 Measure and cut all of the vertical tees and install them onto the top angle piece keeping them in line with the cross tees in the upper portion of the ceiling grid.

Pop rivet each cross tee to the upper angle piece. 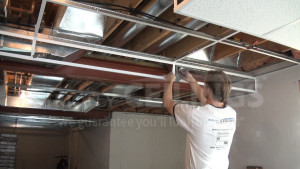 You’ll be using a piece of wall molding again. Place one end of the angle into the 90 degree wall angle piece that you fastened to the wall earlier and place it against one of the vertical drop tees about ¾” down the drop.

Repeat this same procedure all the way down the drop.

Step 6 Installing the lower portion of the drop ceiling grid

Once the vertical drop is built you can complete the lower portion of the suspended ceiling grid.

Here are a couple of tips for you:

Step 7 Installing the ceiling tiles into the vertical drop 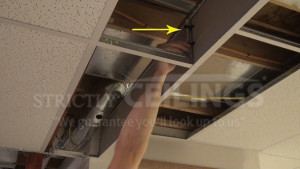 Always install the vertical ceiling tiles into the drop before any other tile are installed. The only exception to this would be if it looks like a ceiling tile would be very difficult to install in a particular area, then install it as you are installing the grid.

Install the vertical ceiling tiles and then place 1 or 2 hold down clips on the back of the ceiling tiles to hold them in place. Here is a link where you can purchase these special clips: http://www.strictlyceilings.com/P/127/StrictlyCeilingsPiranhaHoldDownClips10pk

Once the vertical ceiling tiles are in, then you can install all the remainder of the tiles.

Watch our video to see each step in building basic suspended ceiling drops.  You’ll also get professional tips to help you with your project.